I Use Vaseline for Psoriasis Wherever I Go

If you have psoriasis, you’ve probably gone through thousands of moisturisers, tubs of white goo and other sticky substances, trying to find the one product that will keep your psoriasis flakes happy. Well, call off the search, because that product is none other than Vaseline – the simple, cheap, slippery gunk that everyone always walks past because it’s just too plain-looking.

I’ve been using it almost exclusively for nearly 2 years now, and I don’t plan to stop any time soon. Not only is it as cheap as chips, costing around $2 for a 200ml tub where I’m from, but it’s one of the simplest skin products you can use on your psoriasis. It doesn’t contain any harsh chemicals, perfumes or parabens which make psoriasis act up; all it has is good old petroleum jelly. I even have a small 50ml tub of Vaseline mixed with cocoa butter that I keep at work!

This bad boy stays with me wherever I go

The only problem, and the reason why it has a bad rap, is that nobody uses it correctly. Vaseline is good at locking in moisture – it doesn’t magically moisturise your skin if there’s nothing already there. Consider it a sealant, like an anti-wetsuit that keeps moisture in instead of out. What it really needs to function well is water.

1. Wet your skin with water. This is essential to the process so make sure to do it! I normally slather it on straight after a shower, but if I’m at work and my hands are flaky, I just go wash my hands in the bathroom, without drying them off!

2. Before your skin is dry, rub a tiny drop of Vaseline into it. Make sure to rub it in thoroughly so that every little bit is absorbed. If you are doing it individually on large plaques, you might notice that one pea-sized drop is not enough, so add one more. The key really is moderation – we’re not going for the gooey swamp monster look here!

3. Remember, Vaseline is safe (unless you’re allergic to petroleum jelly, which must be close to 1 in a quadzillion). As such, you can use it wherever psoriasis is rearing its ugly head, be it in between your bum or your face. It is endlessly versatile – just don’t use it on scalp psoriasis because it’s not water soluble and you’ll probably have to shave it off!

4. Do it at least twice a day, and increase that number if you can. Once in the morning and once at night is the bare minimum! Just remember, if you think you’ve tried using Vaseline, have you tried it the Right Way?

5. I’ve been on forums and talked to people who say it’s healed their psoriasis by up to 80%! I wouldn’t go that far, but I would say that it has minimised the scaling by a really great deal.

I can’t emphasise the greatness of Vaseline enough – it has replaced all my moisturisers because, really, what can replace Vaseline and H2O for simplicity? Sure, you can get great herbal ointments, with Shea and hemp butter and the like, but using Vaseline for psoriasis is the “classic” way.  Have you tried it? Let me know down below!

So many to choose from! 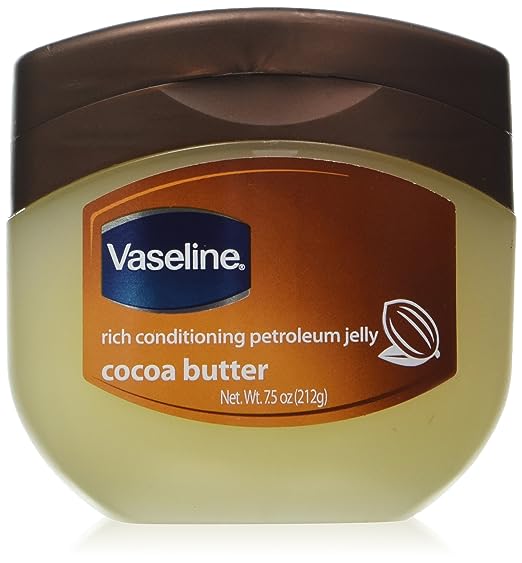 What’s your flavour of Vaseline? Mine, at the moment, is the one with cocoa butter. My skin just eats it up! Some flakers say it works better than the original and while that’s up for discussion, the cocoa butter smell alone makes this a winner. Plus its like the cost of an extra large latte, minus the calories!

redblob I'm just an average 28 year old living with psoriasis. Over the last decade, I've tried everything, from real snake poison to rubbing banana peels over my body. I've finally found an approach that's working for me, and I'm sharing it with all the flakers out there. But Psoriasis Blob is not about one man, it's a growing community of great, red people.

61 Responses to I Use Vaseline for Psoriasis Wherever I Go

This site uses Akismet to reduce spam. Learn how your comment data is processed.